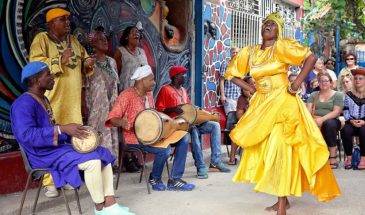 Afro-Cuban Religions - DISCOVER WESTERN AND CENTRAL CUBA. - A tour teeming with UNESCO heritage sites, history, architecture, art, music, AFRO-CUBAN RELIGION and local flavor!
Santeria (Way of the Saints) is an Afro-Caribbean religion based on Yoruba beliefs and traditions, with some Roman Catholic elements added. The religion is also known as La Regla Lucumi and the Rule of Osha. Santeria is a syncretic religion that grew out of the slave trade in Cuba.
Afro-Cubans are Cubans who are of Black African ancestry, mostly West African. The term Afro-Cuban can also refer to historical or cultural elements in Cuba thought to emanate from this community and the combining of native African and other cultural elements found in Cuban society such as race, religion, music, language, the arts and class culture.
Out of 11.2 million Cubans, 1 million Cubans described themselves as Afro-Cuban or Black, while 3 million considered themselves to be "mulatto" or "mestizo". Thus a significant proportion of those living on the island affirm some African ancestry. The matter is further complicated by the fact that a fair number of people still locate their origins in specific native African ethnic groups or regions, particularly the Yoruba (or Lucumií), Akan, Arara and Kongo but also Lgbo, Carabali, Mandingo, KIssi, Fula, Makua and others.
Although Afro-Cubans can be found throughout Cuba, Eastern Cuba has a higher concentration of Afro-Cubans than other parts of the island and Havana has the largest population of Afro-Cubans of any city in Cuba Recently, many native African immigrants have been coming to Cuba, especially from Angola. Also, immigrants from Jamaica and Hati have been settling in Cuba, most of whom settle in the eastern part of the island, due to its proximity to their home countries, further contributing to the already high percentage of blacks on that side of the island.
Santeria icons at an open place of worship in Havana. Santería is a syncretism practiced by many Afro-Cubans
Afro-Cuban religion can be broken down into three main currents: Santeria, Palo Monte and Abakua and include individuals of all origins. Santería is syncretized with Roman Catholicism.
The Abakuá religion is a secret society for men, similar to the freemason orders of Europe. It has not been syncretized with Roman Catholicism and remains close to its origins in southeastern Nigeria and southwestern Cameroon, from the Ekpe society of the Efik people of Cross River State and nearby areas.

*Prices are per person, based on single, double and triple occupancy valid on date specified. Full payment is due when you book your tour. All rates, availability and tours are subject to change without notice. Certain restrictions apply.

* The initial deposit is $500 dollars and is non-refundable and non-transferable.

Havana International Airport Terminal 2 where your tour-guide will be meeting you.
Transfer on air-conditioned bus to Hotel in Havana -Parque Central Hotel.
Check-in at hotel, briefing by guide.
6:00 p.m. Cocktail Aperitif at El Floridita Bar
7:30 p.m. Welcome Dinner at Paladar La Guarida or similar choice
La Guarida began to acquire its lofty reputation in the 1990s, when it was used as a location for the Oscar-nominated Fresa y chocolate. Regularly refined in the years since, the food is still up there with Havana's best, with the restaurant's pioneering brand of nueva cocina cubana driving both classic dishes (ropa vieja; shredded beef) and those that are unusual for Cuba (lamb tikka masala).
Recommendations for the evenings include world-famous Tropicana cabaret (the Moulin Rouge of Cuba), Casa de la Musica (there are a few salsa venues in town), Cabaret Parisien, La Zorra y el Cuervo (Jazz), among many others, reservations can be made through your tour-guide or at the hotel sales bureau in the lobby.
Included Accommodation, transportation, English-speaking tour guide and Welcome Dinner.

Get to know Havana

Visit Hemingway’s former Estate (now a museum) and local private Art Galleries
9:30 a.m. pick-up to visit Ernest Hemningway’s Museum
Hemingway became a fixture of Havana, and stayed in the country longer than many Americans chose to after relations between Cuba and the United States began to deteriorate. He fished extensively aboard his boat, Pilar, and enjoyed the island lifestyle, hanging out in Havana, and entertaining guests at the Finca.

Continue drive to Cojimar, a fishing town where Hemingway kept his Boat
Cojímar is a small fishing town located seven kilometers to the east of Havana. This town is famous for being the setting of Hemingway's most famous novel: “The Old Man and the Sea,” which allowed him to be awarded the Nobel Prize for literature in 1954.

Enjoy Mojitos at Las Terrazas. Drive back to Havana to visit a local Gallery
Lunch at a local Paladar
Afternoon visits to local Art Galleries.

Visit to Hemingway's Museum on the outskirts of the city.
visit a Santeria church and the Santeria Museum in the Regla neighborhood
Guanabacoa School of Music
Continue Drive to Matanzas province. Lunch at a local Restaurant (TBA)
Afternoon visits to Museum of Limonar, San Severino Castle, where the Museum of the Slavery is, and Sugar Mill Triunvirato , site of slave revolts during Spanish colonial Times
Transfer back to the hotel. Rest of evening at leisure
Accommodation, B and L. all museums entrance fees.

Excursion to Viñales Valley – 2 & ½ hours away from Havana -(Oldest Geological region in Cuba dating back to Jurassic Period- stop at lookout point, visit Indian Cave, Mural de la Prehistoria, Tobacco Farm, Viñales Town). Lunch at Finca Paraiso. Back to Havana the same day at the end of the day. This will include Transportation, Tour Guide service.
The Viñales Valley in the Sierra de los Organos near the western end of the island of Cuba is an outstanding karst landscape encircled by mountains and dotted with spectacular dome-like limestone outcrops (mogotes) that rise as high as 300 m.
Tobacco and other crops are cultivated on the bottom of the valley, mostly by traditional agricultural techniques. Many caves dot the surrounding hills faces (Cueva del Indio is one example of them).
The conspicuous limestone cliffs rising like islands from the bottom of the valley are called Mogotes. They can be up to 300m tall.
Viñales is a major tourist destination offering mainly Hiking and rock climbing. The local climbing scene has started to take off in the last few years with many new routes being discovered resulting in an increase in local tourism.
Drive back to hotel and rest of evening at leisure
Recommendations for the evenings include world-famous Tropicana cabaret (the Moulin Rouge of Cuba), Casa de la Musica (there are a few salsa venues in town), Cabaret Parisien, La Zorra y el Cuervo (Jazz), among many others, reservations can be made through your tour-guide or at the hotel sales bureau in the lobby.
Accommodation with breakfast. Full-day excursion to Viñales valley with Lunch. Entrance Fees to places.

Get to Know central Cuba - Bay of pigs and Cienfuegos

8:30 a.m. Departure for Central Cuba.Center of Cuba - Cienfuegos
Early departure towards Cienfuegos city passing through the Bay of Pigs area.

The 1961 Bay of Pigs invasion begins when a CIA-financed and -trained group of Cuban refugees lands in Cuba and attempts to topple the communist government of Fidel Castro. The attack was an utter failure.
Visit the museum of the invasion of Bay of Pigs and continue drive to Cienfuegos city
Drive to Cienfuegos (Cienfuegos is a city 3 & ½ hours away from Havana -the only one founded by French settlers on the island-on Bahía de Cienfuegos, a bay on Cuba’s south coast. It's known for its colonial-era buildings. On the central square, called Parque José Martí, Tomás Terry Theater has gold-leaf mosaics and ceiling frescoes.
Lunch at a local Paladar
visit the city of Cienfuegos

The Provincial Museum explores the city’s colonial history. The Arco de Triunfo commemorates Cuban independence. Ferries cross the bay to Castillo de Jagua, an 18th-century fortress.) -
City of Cienfuegos was declared a site of the world heritage by UNESCO in 2005
Drive on to Trinidad City (an hour & 15 minutes away from Cienfuegos). Accommodation in Trinidad
Accommodation with breakfast, transportation, tour guide service, Museum of Bay of Pigs, Lunch, entrance to Thomas Terry Theater, visit art gallery

Rest of the day at leisure. Opportunity to enjoy magnificent local music at Casa de la Musica Venue
Accommodation, B and L. Museum of bay of pigs, Theater entrance fee.

City tour of Trinidad, day in the city (known as the city of Museums, the best preserved colonial city in Cuba)
Trinidad, city, central Cuba. It lies on the southern slopes of the Sierra de Trinidad, north of its Caribbean Sea port, Casilda. Trinidad was founded in 1514 by Diego Velázquez de Cuéllar.
UNESCO had little to ponder when it declared the colonial core of the town a World Heritage Site in 1988.
Visit Museo Romantico, former Mansion of a local sugar baron
Visit to Museum of the City (former Cantero Palace). Cocktails at La Canchanchara. Continue on to Plaza de las 3 Cruces, unique possibility to visit LA CASA DEL BABALAO, the Afro-Cuban Priest in the area)

Lunch at a local Paladar
Continue walking tour in the afternoon, visiting art galleries and local flea markets
Drive back to hotel and rest of the day at leisure (do not miss La Casa de la Musica in Trinidad, Cuban traditional music at its peak)
Accommodation with breakfast, transportation and tour guide service, Canchanchara Cocktails, lunch, visit to museum.

Santa Clara and back to Havana

Drive back to Havana City through santa Clara City
Drive back to west of the island through Santa Clara
Stop at Manaca Iznaga Tower by Valle de los Ingenios, sugar cane valley where 70% of the sugar in Cuba was produced
The Manaca Iznaga tower in Cuba's Valle de los Ingenios was erected in 1750 in order to observe and control the slaves working in the sugar cane fields around the hacienda (or plantation). ... The Manaca Iznaga Tower is the tallest lookout tower ever built in the Caribbean sugar region.
Continue drive to Santa Clara City where Che Guevara held the decisive battle against then Cuban president Fulgencio Batista (December 1958)
Santa Clara. About a 4 hour drive from Havana, holds a special place in Cuba's revolutionary history and it's best known for its massive Che memorial
visit Che Guevara Memorial.
Lunch at a local Paladar
Continue drive to Havana city
Accommodation in Havana
7:00 p.m. pick-up for Farewell Dinner at local Paladar San Cristobal
San Cristóbal Paladar is an environment full of reminiscences that point to our culture and our heritage. The Havana of the 50s stalks us in every corner, in the meticulous composition of each dish. San Cristóbal transports those who visit it to the lost universes that still remain in the works of Lezama
Former President Barack Obama dined here upon his visit to Havana

Recommendations for the evenings include world-famous Tropicana cabaret (the Moulin Rouge of Cuba), Casa de la Musica (there are a few salsa venues in town), Cabaret Parisien, La Zorra y el Cuervo (Jazz), among many others, reservations can be made through your tour-guide or at the hotel sales bureau in the lobby.
Accommodation with breakfast, transportation, tour guide service, lunch, entrance at Manaca tower and Farewell Dinner

Your driver and tour guide will take you (3 hours before your flight time) to Havana’s International Airport for Outbound Flight.
Accommodation with breakfast, transportation and guide services
END OF SERVICES.